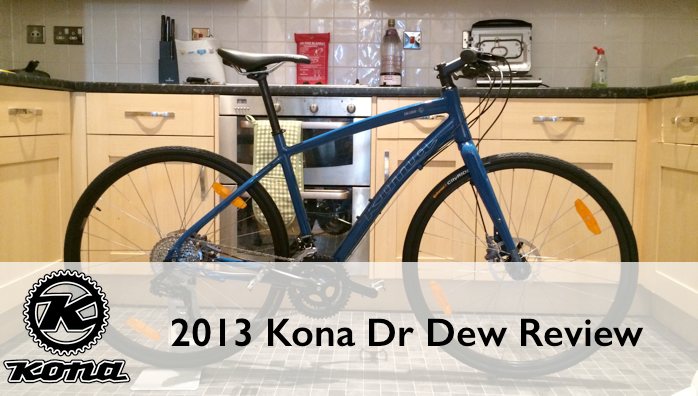 After almost 2 years without a city bike I am back in the saddle with a new Kona. For those keeping track, this is my 3rd bike in London. The first two (another Kona and Specialised) were both stolen, so this time i am being extremely careful. After all the specialised was stolen from outside my office whilst it was triple locked!

Anyway, the Kona is their replacement and 50 miles in I thought now would be a good time to do a little review.

The Kona Dr Dew is a mid to high end hybrid ‘urban commuter’ bike. It’s designed for efficient movement around the city but with more comfort and control that a traditional racing bike. It has a more comfortable mountain bike style riding position and disk brakes. But with road like wheels and running gear.

I use it mostly for leisure, in London I ride around nearby parks, but i have taken it further afield down to somerset for a 25 mile ride along the Taunton and Bridgewater canal a few weeks ago.

I have two other uses in mind. The first is that I would like to one day try a commute. The route from home to work is simple enough, it’s mostly just following a canal. The issue is the busy roads on both ends. Neither are very encouraging.

The second future use is perhaps more realistic. Sponsered cycling. I originally purchased the bike to do the RideLondon 100 mile bikeride with a friend in aid of the National Autistic Society. We missed out this year due to my health. But i hope that if i train hard perhaps i can enter next year or a similar event.

The Dr Dew is the top spec city bike that Kona sells. The retail price is around £900 but I picked mine up for less than half that amount. The bike has a good all around spec but the highlights for me are defintely the brakes, tyres and gearing.

The Kona has a set of Avid Elixir 3 hydraulic disk brakes which are about mid range. They are designed for mountain bikes rather than city bikes which means they have much more power than typical cable pull disk brakes found on commuting bikes.

Other bikes i looked at even at £300 more had generic hydraulic disk brakes or cheap Shimano units. While the Shimano brakes are good, they dont have the same feel on the low end as the Avid models.

I really like the confidence these brakes provide. When they were new, they took a little bit of time to fettle into shape, but now they are running absolutely smoothly. When out at the park, I have the confidence to let speed build knowing that if needed i can bring the bike to a stop rapidly.

When combined with the tyres, the braking is predictable and precise. This leads to extremely enjoyable, highly controllable brake drifts when desired. At the far corner of a local park is a long sweeping downhill follow by a 90 degree bend which is massivly satisfying to drift around on the brakes.

As well as being fun when wanted, the brakes are reliable and good at more mundane stopping duties to when riding to and from the park.

The Contenential CityRide 32mm tyres are also very impressive. They combine a high profile centre (for high speed, low resisitance cruising) with a very gripping side tread for more grab in the rain or when the tyre is pushed.

My previous Kona also had Contenental tyres. They were much less sporty, with a 37mm width and no high profile ridge, i much prefer the new rubber.

The performance is not entirely free. The trade off is comfort. The 37mm CountryRides on my last Kona where much happier with light off road riding and bumpy lanes. The CityRides on the Dr Dew are best for surfaced paths. Riding along the gravel tow path of the canal was much rougher than it was on my old Kona.

For the majority of my riding this tradeoff is fine. I can deal with reduced comfort in return for the increase in efficiency. I don’t run the CityRide tyres that hard at around 45 PSI, but for my next long canal ride, i made drop the pressures slightly to see if that helps with the comfort.

The gearing is powered by a Sram Via Centro unit. The Centro is a hybrid bike specific gearset based on mountain bike technology. It has 2 × 10 setup using a wide ratio 10 speed rear cassette.

In general, I have found the gearing to be excellent. Shifts are smooth and predictable and the mech is very quiet and refined. I have made them crunch a few times, but mostly that was due to user error and trying to put power through the drivetrain while shifting at very low speeds.

Being a city based rider, i dont intend to throw much mud into my general riding, but the small amounts of mud, dirt and dust already thrown at the Centro seems to have been shrugged off without issue. When i got back from the last canal ride i also pulled a few large sticks out of the cassette which i had not noticed while riding.

The other finishing kit on the Kona is all very good. While i dont have any plans for upgrades at the moment. I do have a good feel for where future upgrades could be well placed.

With the background and kit discussed, how does she ride? In the 50 miles we have shared so far she has ridden very well indeed. On smooth surfaces the kona dew can gain and shed speed easily and smoothly. Even when the going gets a little rougher, the kona remains smooth.

When the going gets really rough (muddy tracks!) her harsh ride does start to jar. But as mentioned above, this may be resolved with some tyre pressure tweaks. This is a very small part of my riding so generally is not of concern.

As I alluded too earlier, within the next few years I hope to get good mileage out of the Kona. At first around the local parks, but hopefully with some sponsored cycle rides and perhaps a bit of commuting too.

The few changes i am considering making are more for comfort than for need. The first would be to swap the handle bar for a slightly more flexable Carbon Fibre model. This would help to reduce the harshness of the ride while also reducing the weight a little.

The second change is more functional. I am very tempted to invest in a bottle holder so that i can drink while i ride without needing to reach into my bag and upset the lion who dwells there. Carbon fibre bottle holders are cheap these days, so I may splash out on somehthing swish with some of the money I was given for my birthday.

I am really impressed with the Kona Dr Dew. It has a good build, fine ride and manages to stay pretty light. I expect it to last me for a very long time, and i look forward to many more miles to come.