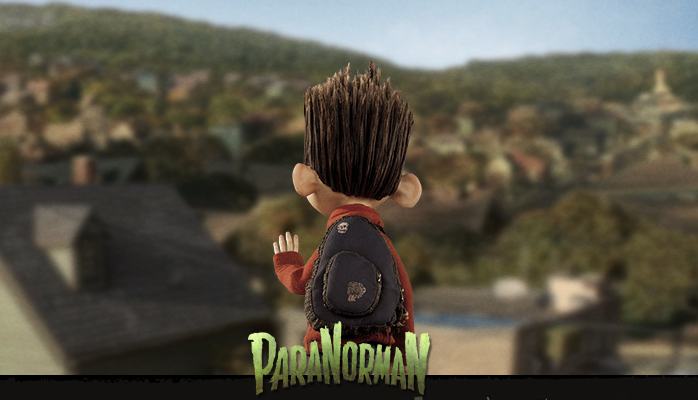 Paranorman is a fun twist on a classic format. It superbly manages to mix comedy and horror… arghhh! I can’t do it!

Right, this is my first ever film review. I could write all the normal fluffly bullshit or i can cut to the chase. Go see Paranorman if you can, it’s a good film and well woth the price of admission. Here’s why.

The story centres on the life of Norman, an 11 year old somewhere in America. He has the ability see ghosts and he is exhiled by his community. Over the course of the film he wins the trust of the community and solves a 300 year old curse.

On the way he unleashes zombies, makes friends and learns it’s okay to be different. I wont go into to much more detail as i dont want to spoil the film. But it ultimately boils down to Norman learning to value his difference and then convincing a fellow oddity that they dont have to respond with a wrong when they have been wronged.

The characters are pretty good, my favorite character is the zombies. They are central to the plot of the film, Norman has to forgive and help them in order to help everyone.

By understanding the zombies norman has to figure out his own issues.

Apart from Norman and the zombies, the other characters are pretty robust. It’s nice to see a bully be revealed as a cowered who comes through in the end. If a little clichÃ©d.

Paranorman has an unique animation style. It seems to be a mix between stop motion and CGI. The overal affect is pleasing, Towards the end of the film the visual effects kick into a higher gear for the grand fanalie. The animation becomes more fluid and the effects take over.

The film is respectful of the tools used to make it, the matt paintings are clearly chalk artwork but they fit the feel of the film well.

From my personal tech perspective the film was very impressive. All the effects were believable and well delivered. 3D was used to help tell the story rather than bludeon the audience with gawdy shocks and suprises.

I saw all the Halloween films this year (eventully). Each film had its own qualities and will appeal to different audiences.

The most kid freindly film is Hotel Translavania, as it has few scary parts a very simple storyline and easily understood characters. Paranorman has a few to many scary parts to work with younger audiences. I saw many parents removing bawling kids form the thetre during some of the more intense scenes. Frankenweenie is a little complex and has to many slow parts for kids.

Paranorman has he most advanced look of the three films. Frankenweenie is brave in being black and white but i am not convinced it works that well. It’s a good talking point but i don’t see it enhancing the telling of the story. Hotel transalvania looks like most other animated films. It’s somewhere between pixar and shrek quality not really as convincing or fluid as either.

Paranormal is out of season now, so its often being put on for the cheap kids showing. Thats not a bad thing in and of itself, it was an enjoyable mornings entertainment and was incredibly cheap. If you find yourself bored of a saturday morning the early morning shows certainly give you something to do.

I paid £1.75 to see Paranorman and that was a bargain. As films go it’s firmly in the top half but has it’s moments where it genuinely sets the standard. If you can catch on the big screen i would encorage you to do so.