Somtime, a very simple bit of awesome software comes along and it blows evrything away like a nukclear warhead in a kite factory.

The last time i had this experience was when i moved form using notepad, to dreamweaver, all of a sudden i had tag completion, and syntax checking, i was very impressed.

This time has now come again though, withing 30 secounds of installing the firebug extension I was on the phone to alun with the good news,

Firebug has way to many feauture to try to descripe.. thier website describe them better than i ever could, but i will give you an overview of my favorites.

Box model Diagram: i have below included part of a screen shot from my website: 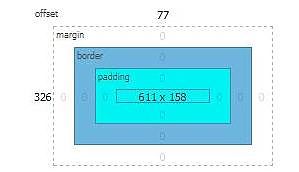 This is usefull because it will be able to show colapsing margins and other CSS nasties live while you are looking at the page, this works nicely with my next favorite feature:

Quick and Easy Live CSS editing This is somthing that the firefox developmetn toolbar has doen for a while, but this implementation adds a few further useful layer with the ability to add, (and change) rule, by simply selecting the element you want to change. From here it will show you the cascade of styles.

Showing Where Element Rules Are From this si the first tiem i have seen an inspector which allows you to visully see the cascade of the rules. Also, as rules are overridden they are crossed out, meaning that you can see what rule are still affecting, and which are not, extremely useful when you need to to know where that annoying rule is hiding. This also help sort out and specificality bugs in you code very quickly rather then trying to figure it out in base 10.

I have only highlighted here, my favorite few feature, I havent even mentioned some of the one which i have only didcoverd in the last few hours. So if you are a devloping kind of person (or a very nosey person ;P) then go and download firebug, you will not regrest it