I love apple macs. and now (at long last) i own one. Introducing My Power Mac G4. 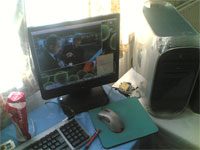 Macs have a reputation of being expensive, although this is not always the case. after i found myself laptopless i needed to find a computer to work on. This presented a problem, as i only had around Â£100 and i had to find a machine powerfull enough to run macromedia / adobe fireworks 8 for my design work. Also as i had no facility to play back DVDs i would require a machine which could plays DVD’s.

So with this in mind i started looking around both online and in local computer shops. Not suprisingly i did not find much. the cheapest desktop machine i coud purchase secound hand was around Â£75. but this machine was 4 years old and did not have a DVD drive. It was a 350mhz compaq.

After a little more thinking and investagating i found a company offering an OS less AMD based machine for Â£179.The specification wasn’t to bad, but it was clear due to the low buget componants that this machine would need serios upgrading in the short term. Also, i would have to pay for a copy of Windows, as fireworks does not nativly run under ubuntu. So i was left thinking and saving.

Then whilst talking with a freind (you know who you are) they mentioned that the local collage was selling off thier macs in the art and design center after an upgrade. So i rushed over to the collage and i spoke with the tech support staff and they told me to come back later that week to collect a mac.

So later that week, i traveled back to the collage with a freind giving me a lift and i paid Â£90 for my Power Mac G4.