I first moved to the Apple Macintosh platform back in 2007, from those early days the MacBook was my trusty work machine and this new machine has continued this trend. 14 months after i switched from my original MacBook its still going strong.

When this machine was released it was the first of the new wave of unibody designs. This means that the case of the laptop is milled from a single block of aluminum. This leaves a light, rigid product with a classy finnish.

Having owned the previous plastic model i found the new finnish to be much more resilient to small scratches and denting. The older models would be covered in small hairline scratches after a few months which although not effecting the performance of the laptop would be mighty annoying after investing so much. I am happy to report that even after 14 months of use there are no scratches visible on the lid or the base of the machine.

One of the advantages of the all metal construction is strength, as i found out after owning the machine for about 3 months after the machine was dented. Although the machine dented it was fine, i feel that the older MacBooks were more brittle so i have been very impressed with the new case.

With the new models there also came a couple of smaller changes, with the biggest (and most impressive) being the new all glass fronted screen. Taking a few design cues from the Aluminum iMac the screen is surrounded by a black border. Having had a shiny reflective screen on my original MacBook i am use to the reflections, however the new screens are more reflective. I would argue this is not a huge issues but something it will catch you out! Luckily those times when reflections are an issue you can normally move the screen or increase the brightness to compensate. 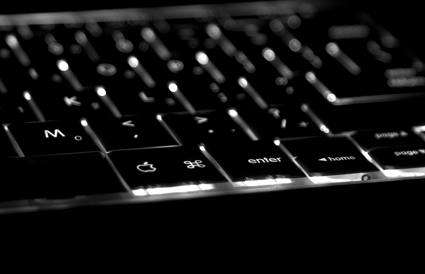 The final, change was the inclusion of a backlit keyboard option. If like me you work a lot in the evenings then this optional extra is a god send. A gentle glow from the back of the keys works wonderfully to reduce the eye strain of typing away! Its one of my favorite changes and to me is worthy of the upgrade cost alone!

However, as with anything all is not perfect with this machine, my only functional gripe about the machine has to be the lack of ports. In between this and the last model apple dropped the firewire port. Although the firewire port may not be that important to everyone it seems silly to exclude the people who use it, on a machine this expensive it seems a huge missing piece rendering the machine far less useful.

On the other hand, Apple are well known for introducing the new and removing the old, they were the first to drive adoption of the USB port and they were the first to stop supporting floppy disks. Apple argued that most consumer users (the target audience for the MacBook) never used the firewire port, and that their 15â models retained the port for the pro users who required it. Although this may work for many, for myself the size of the 13â model was the main draw. When i was choosing my machine the screen size was the deciding factor. Apple reversed the decision a few months later when they bumped all the unibody MacBooks up to be Pros. Very frustrating for people who had invested in this generation of machine.