How do you coda?

I recently upgraded to a one of those shiny new ‘unibody’ MacBooks. But for the first time since i have been building websites i did not install dreamweaver.

Dreamweaver is Adobe’s tool for professional web developers to develop sites with. The tool is aimed around the What-You-See-Is-What-You-Get model and all of the advanced features for database integration allows you to build a dynamic site very quickly. However, i never use it this way.

I hand write and craft all of my markup and backend systems myself. This results in far higher quality than the markup dreamweaver spits out as an estimation of what you want. So i was not using dreamweaver the way it was intended to be used.

Dreamweaver is also a very expensive piece of software. With the upgrade cycle looming i made the choice to look around for another option.

Quite a while ago now i downloaded Coda from Panic Software, after a quick play around i didn’t like it, it had some strange behaviors which made it easier for me to stick with what i knew. However with the recent upgrade to version 1.6 Coda is something i can actually start using on a day to day bases. So with the explanation of how i got here, lets get on with a bit of a review. 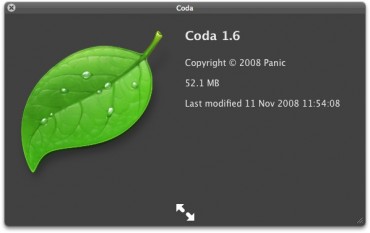 Apart from looking good coda offers some very apparent advantages over its competitors. The first of these is the flexibility of all the tools being a single click away.

Having all of the tools i need so close at hand has made developing XHTML & CSS templates much much quicker. Within coda you can split the screen up so that instant previews are available right below your markup. This has been incredibly useful and has led to a more agile development approach and more XHTML prototyping within my workflow.

Coda excels in other areas too, for example the ability to use an SVN repository from right within the app is far more powerful and flexible then what dreamweaver offers in it basic check in and out support. Having these more advanced tools right at my finger tips has helped me to use them on more projects. Smaller projects which may have once been completed without SVN (maybe due to time issues or just lack of clear benefit) are now being implemented into SVN as its trivial to do so.

These are only a few of the points which have made Coda good to use. I have not commented much on the code editing itself as this is about the same as any other tool. However Coda does have some quirks.

I would love to say Coda has no downsides or issues, however this is not something i could say without my nose taking a turn for the lengthy. Although the majority of my complaints are small issues, they negatively impact the user experience in mighty ways.

The first issue which still irritates me everyday is the block-editing system. By block editing i am referring to selecting and acting on a block of code in one move. Coda gets most of this right (I can select areas and drag them, i can replace entire blocks of code via copy and paste for example) however it falls over itself with the simple tab command.

Every code editor i have ever used has the tab key to format your code, with a simple tab you can move whole blocks into their desired place to make reading your code easier. For some reason coda ignores all this, and upon the pressing of tab it replace the selection with a tab. It refuses to move the code across the page!

The software provides a work around in the form of its block-edit system, however this system is clunky and fiddly. I would much appreciate it if they could just add an option to the preferences to
give me back my tabbing!

Update: Recently while surfing around on the internet i found the following Coda Extension: Tabster it fixs the tabbing issue hooray!

Coda also shows its young ages often with issues such as memory leakage and the occasional piece of odd behavior. This has been improved in the last few versions but it still has some way to go.

Coda is a fantastic piece of software for how it fits into my workflow. Although it has the occasional slip up it has made my work more efficient and enjoyable. Well done to those guys at Panic!